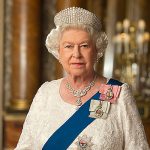 It is with great sadness that we heard of the death of Her Majesty Queen Elizabeth II on 8th September 2022.  A national period of mourning will now take place until the state funeral, which it is expected will take place on Monday 19th September.  All formal council meetings and events will be suspended during this period of mourning.

The Mayor of the Bay of Colwyn, Cllr Colin Matthews, has issued the following statement:
“The death of Her Royal Majesty has come  as a shock to all in Colwyn Bay and the County of Conwy. The Queen was an example  to us all in leadership and drive and will be remembered for her dedication to her role and our Nation for a long time to come. On behalf of the Bay of Colwyn Bay Town Council and the areas which we cover, we send our sincere condolences to the Royal Family.”

Details will be updated here, in due course, regarding local arrangements during the period of mourning, including arrangements for signing the local book of condolence, church service(s) and the laying of flowers.

In Old Colwyn there will be a book of condolence in St Catherine and St John’s Church on Station Road. The book of Condolence will be available:

Saturday from 11am – 2pm, Sundays for half an hour before and after services and during school hours in the week.

The church is also available during these times for private prayer and reflection.

Those who wish to lay flowers to mark Her Majesty’s death may do so next to Coed Pella.

A service of Commemoration marking the death of Her Late Majesty Queen Elizabeth II will be held at St Paul’s Church, Colwyn Bay on Sunday 18th September at 6.00pm.