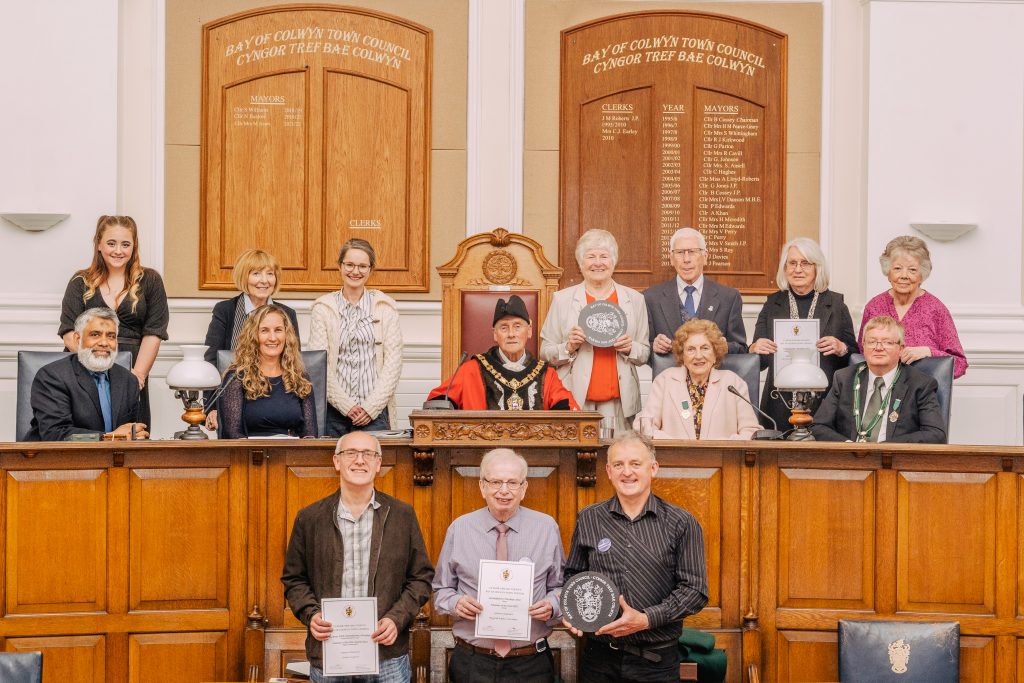 The Bay of Colwyn Town Council is delighted to announce the winners of the Bay of Colwyn Volunteer of the Year Awards for 2022.  The nominations were considered by the Volunteer Awards Committee, which includes representatives from the local community and from Community and Voluntary Support Conwy (CVSC).  Award recipients were invited to the Town Hall on Monday 16th May, with the winners of each category being presented with a slate plaque and certificate by the Town Mayor, Cllr Colin Matthews.

Winners of the Bay of Colwyn Volunteer Awards 2022 are:

Town Mayor, Cllr Colin Matthews, said; “As one of my very first duties as Town Mayor for the Bay of Colwyn, I was delighted to have been asked to present the awards for the eleventh Annual Bay of Colwyn Volunteer of the Year Awards.  During my year as Mayor, I am looking forward to having the opportunity to visit a number of local clubs, voluntary groups and other organisations and witness first-hand the amount of time and effort members of our community are prepared to give to voluntary causes, and to those organisations that are busy helping and supporting others in our community”.

Later this year, the Bay of Colwyn Town Council will be inviting nominations for its Volunteer of the Year Awards for 2022/23.  There are seven categories for nomination:

–   Adult (25-64)
–   Adult (65 and over)
–   Green Volunteer or group
–   Trustee
–   Other Groups (two or more individuals, whether informal or formally constituted)
–   Additional Category (for any that may not meet the criteria for the other six categories)

Town Clerk, Tina Earley, states: “We are now in the eleventh year of our Volunteer Awards, which were introduced to recognise the valued contribution of our many local volunteers and voluntary groups, who show selflessness, devotion and service to the local community and are an inspiration to others.  This is our annual opportunity to say “thank you” and I would urge you all to think about the other unsung heroes in your community and consider nominating someone you know for next year’s awards”. The deadline for receipt of nominations for our next awards is 31st January 2023.